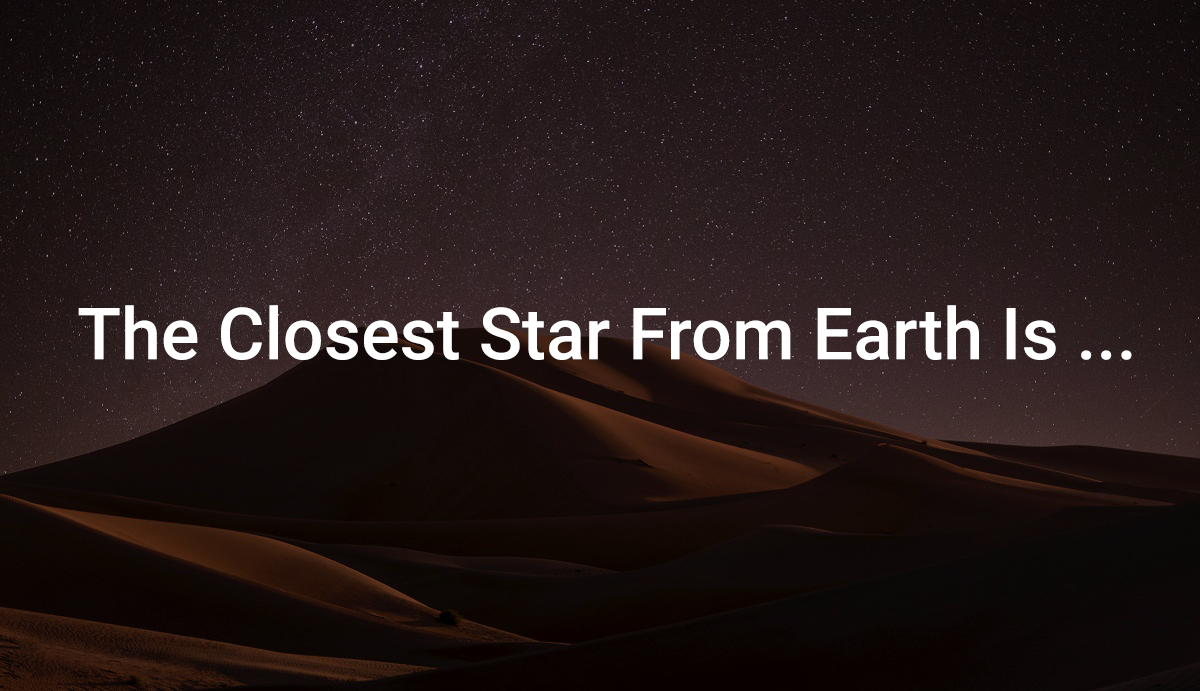 Where is the closest star from Earth located?

What type of star is Proxima Centauri?

Proxima Centauri is one of the smallest known stars, with a mass of about 12% of the sun and a radius of about 0.15 times that of the sun. Red dwarfs are known to be very long-lived stars, with lifetimes of tens of billions of years. They are also very faint and emit most of their energy in the infrared part of the spectrum. This means that, despite being the closest star to Earth, Proxima Centauri is not visible to the naked eye and can only be seen with a telescope.

Proxima Centauri is also a flare star, meaning that it is prone to sudden and dramatic increases in brightness. This is due to the star’s relatively low surface gravity, which allows it to have a more active corona that produces flares. These flares can be up to 10,000 times more powerful than those of our sun, making Proxima Centauri one of the most active stars in terms of flares.

Are there planets around Proxima Centauri?

Proxima b is a rocky planet with a mass about 1.17 times that of the Earth, and it takes about 11.2 Earth days to orbit its star. Proxima b is located at a distance of 0.05 AU (7.5 million km) from its star. Its surface temperature is estimated to be around -40 to 30°C, which is not hospitable for life as we know it. However, the planet might have a subsurface ocean that could be potentially habitable.

Scientists are interested in studying Proxima b because it is the closest exoplanet to Earth and could potentially be visited by future missions. It’s been proposed that the planet could be studied by a flyby or a direct imaging mission.

Can we go to Proxima Centauri?

Can we travel to the closest star from Earth? Going to Proxima Centauri is currently not possible with current technology. The distance between Earth and Proxima Centauri is about 4.22 light-years, which is equivalent to about 25 trillion miles (40 trillion kilometers). At the speed of current spacecraft, it would take tens of thousands of years to reach Proxima Centauri.

However, scientists and researchers are working on developing technologies that could make interstellar travel possible in the future. One of the most ambitious projects is Breakthrough Starshot, a proposed mission that aims to send a small probe to the Proxima Centauri system at high speeds using a powerful laser beam. The spacecraft could travel at 20% of the speed of light, and could reach Proxima Centaury b in about 21 years!

The probe would be about the size of a smartphone and would carry cameras and other instruments to study the star and its exoplanet, Proxima b. The mission is still in the research and development phase, and it would take several decades to complete.

Another approach that has been proposed is the use of nuclear-powered propulsion systems, which could potentially cut the travel time down to a few decades. However, this technology is still in the early stages of development, and it is uncertain when it will be ready for use.

Additional references about the closest star from Earth: